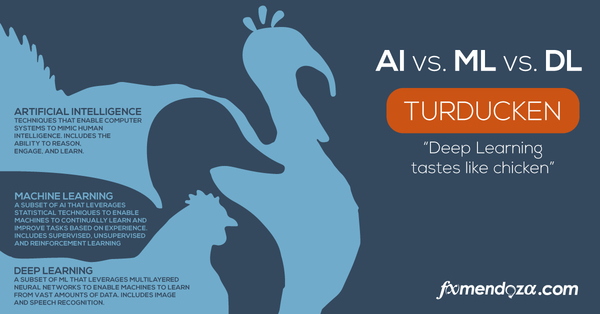 Have you ever been at a Thanksgiving feast where, instead of plain old turkey, someone instead cooks a Turducken? If not, then you probably have no idea what I am talking about, so let me explain: a Turducken is a dish that is like a carnivore version of a Russian nesting doll. Instead of smaller dolls being placed snugly inside larger ones, however, you have three different types of birds — a chicken, a duck, and a turkey — being stuffed inside each other in that order. The result is a meal with a lot of meat — and a starting point for conversation so you can avoid those awkward family discussions.

Keeping that analogy in mind, we’re going to try and explain a few terms in the world of technology. There are a lot of terms out there that are bandied about by experts, and it can be pretty overwhelming if you don’t know the difference. I am often approached by people trying to learn the differences between Artificial Intelligence, Machine Learning, and Deep Learning, so, keep the idea of the Turducken in mind as you read the following.

AI is by far the most recognized term out of these three, and it’s also the one used most incorrectly. When people think of AI they think of computers achieving consciousness and taking over the world. Instead, though, AI is a blanket term that simply refers to computers and machines exhibiting some form of intelligent behavior. This could be behavior the computer learned, but it could also just be behavior that seems intelligent due to the programs and routines that have been written for it. In other words, no actual thinking need take place. For all of these sorts of situations, AI is the umbrella term that is used. So, in our analogy, AI is the turkey, because it is the largest of the birds and encompasses everything.

ML refers to exactly what the name suggests: a machine having the ability to learn on its own. In an ML situation, a computer doesn’t only read its code: it also has the ability to adapt and modify its own parameters based on input. The result is a computer that can use what it knows to start learning and making predictions about the future. In our analogy, ML is the duck — stuffed inside the turkey as one small subset of AI.

Our final term is DL, or Deep Learning. This is a subset of ML. Where ML refers to all machine learning, DL is about computers learning through deep neural networks that consist of layers and layers. These layers are usually an attempt to mimic human brains and learning, but at this point in time we’re still a long way off. DL, however, is called this because “deep” refers to this multi-layered approach to learning. While it’s not up to the level of human thought yet, many startling advances have come about as a result of DL. This is how we get financial software, voice recognition or facial recognition programs — the machine takes in an enormous amount of data and then uses that information to learn how to react to even more data. In this final analogy, DL is the chicken — stuffed inside the duck as an even smaller subset of ML.

I hope this analogy has helped to clear up some of the difference between AI, ML and DL. While they are often used interchangeably, they do mean and refer to different things, and knowing what’s what can help you in the future as you try to make sense of all that is out there (in other words, doing a little Deep Learning on your own!)

For those enjoying a Turducken this Thanksgiving, I hope you are armed now with enough knowledge on this emerging technology to impress your friends and family.

Want to join the discussion?
Feel free to contribute!

Data is Not the New Oil
Scroll to top